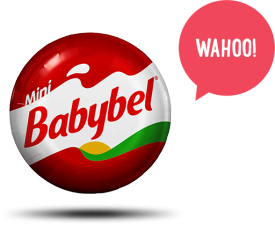 Thank you! You've just subscribed to our cheese-filled newsletter. Get ready to recieve our super-cheesy news and fun!

*For kids over 12 or kids with adults

1. While enjoying your whole net of Mini Babybel ® 5P, make sure you keep the red wax shells.

2. To make the lobster, we start from the tail. We open one half of a wax shell and give it a concave shape by pushing in the middle with your thumb.

3. To make the body of the lobster, we press 4 halves of the wax against each tother slightly bending them into two.

4. We add the fifth wax half to make the head, and use two perppercorns to make the eyes. The final two wax halves are placed o either side of the lobster head to make the claws. Your lobster is now ready to swim to the bottom of the sea!